Click on the map link to see the route and choose the one that best suits your experience level. The mountain bike routes that we offer are tested by experts and accompanied by technical data, detailed maps and description.

This tour will take us to the two lakes of the area:first lake Mezzano a little gem in the enchanting  Lamone natural Reserve, then famous Lake Bolsena with its two islands. Both ex volcanoes now separated by what once was the border of the craters.

Once left the castle on our bikes we start by following an old trail named the Brigands Path because often used by outlaws around 200 years ago to escape from the law. This trail climbs at a steady easy angle towards the hills framing the  crater of  lake Mezzano through oak and chestnut woods, from the top a breathtaking view on the lands degrading towards the sea.

Encircling the lake from the north we face a couple of  steep hills  to climb, but the beauty of the lake and surroundings will sooth the pain of the effort. Now we are inside the crater of the ex volcano and crossing enchanting countryside made by valleys, woods and hills we follow some old trails leading us up to the border of the next crater containing Lake Bolsena. A breath taking view of the lake accompanies our descent to the shore. Once there we follow the coastal trail,through canes and olive trees.

After some 10 kms it’s time to climb back again along an internal trail that through the hills will  take us to Castello S. Cristina. Following the brigands path, an old trail used around 200 years ago by outlaws, we reach the town of Acquapendente positioned on the old pilgrims way from Canterbury to Rome, we follow it for a while then we turn east and we descend through beautiful woods until we reach a river crossed by an incredible medieval bridge. Climbing the steep hill above with an effort we reach the top where Torre Alfina castle is nestled. Beside the view there is a bar where a fantastic ice cream is produced. Through local side roads in the woods we pass by another castle named Montalfina and then with a stunning view of Lake Bolsena we reach our base at the castle. 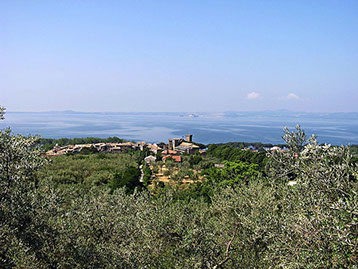 We leave the castle turning immediately north  along the gravel path  that after crossing the provincial road  will lead our bikes beyond  the  Onano village  into Tuscany. Here the steep ups and downs give way to a more gentle, succession of rolling hills. Once reached the village of S. Quirico, crossing the few houses we will reach the incredible Vitozza archaeological site  with its medieval ruins of castles and churches  built around  year 1100 a.c. This place deserves to stop and enjoy the view of the scenery around us,the deep gorges with lush vegetation providing a natural defence for the inhabitants and the Mount Amiata group of mountains right in front.

A 30 min ride through some old trails and we reach the Sorano thermal baths.

Turning north east we arrive in the fortress village of Sorano, dominated by a  big defensive complex built by the Orsini family during the renaissance period. Through the historical center  and the famous medieval door “Porta dei Merli” we arrive at the bottom of the gorge were the river Lente flows gently along. Time to test ourselves on the way up of the gorge to reach the top of the plateau.

A very scenic gravel road leads us to the Montorio game reserve and back to Onano through local side roads, from there back to S. Cristina castle. 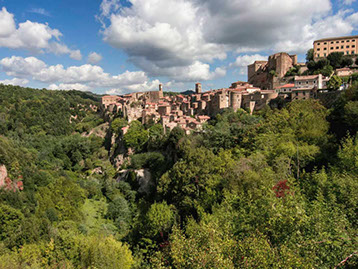